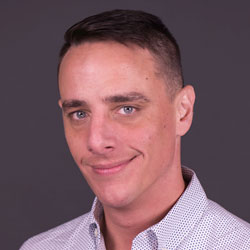 What led you to a job at Cerium Networks?
I worked in one of the most challenging jobs the military has to offer (Technical Escort), both physically and mentally, and absolutely loved it. When I became a civilian my body demanded I leave the physical rigors behind, so I turned to sales as a job that could offer me new challenges every day. The pinnacle of sales is high technology sales, so I set my crosshairs on that goal. To achieve it I went through a Cisco sponsored program called Tech Qualled that trains and transitions specially qualified military veterans into the technology field.

Outside of technology, what is your dream job?
I want to mentor and develop other salespeople, the only thing better than achieving your own goals is helping someone else achieve theirs. Outside of sales: GM of the Detroit Tigers; I would also consider doing the same job for the Detroit Lions as I am a glutton for punishment.

What is your favorite thing about working at Cerium?
Being trusted to grow and develop the Boise market; it’s a challenging task that will yield incredible rewards for all of us.

What do you do when you’re not at work?
At home my son and I like to play video games to relax, otherwise you can probably find me watching my local sports ball teams play or getting whooped in Chess.

What is the craziest thing you’ve ever done?
A vast majority of the top answers are not appropriate for this publication or require a security clearance. Buy me a beer to hear more!

Here’s a stupid thing I did: As a young private I found a set of CAIS vials and instead of immediately reporting it to the Technical Escort team (this was before they recruited me) I decided to conduct an experiment on local insects. I ended up contaminating my thumb with Lewisite/Sulfur Mustard and spent the day in the hospital getting lanced and drained. It hurt like hell and was the most awful smell you can imagine.

(CAIS stands for Chemical Agent Identification Set and was used primarily from 1928 through the 1960s to train soldiers in the safe handling of chemical warfare agents. These sets used live WMD agents and are considered very dangerous)

What is something most people don’t know about you?
My sister is a reality TV star on Vanderpump Rules. Love you Kristen! I’ve also never watched a single episode.

What is your favorite TV show or movie?
Off the top of my head probably Snatch for movie, Rick and Morty for TV Show.

Who is your idol?
My mother. She’s an Arab American that was raised by a poor Irish family and grew up in very tough circumstances but always put one foot in front of the other and never made or accepted excuses. She raised three children by herself while working multiple bar tending jobs and always made sure we didn’t go without. If I inherited even a fraction of her willpower, I am going to control the universe someday. She is a terrifying 5’3” ball of fury. Love you mom <3

About Kate What led you to a job at Cerium Networks? I worked with Cerium as a customer for ab...

END_OF_DOCUMENT_TOKEN_TO_BE_REPLACED

About Dave What led you to a job at Cerium Networks? The job was advertised through Tech Qualled L...

END_OF_DOCUMENT_TOKEN_TO_BE_REPLACED

About Lisa What led you to a job at Cerium Networks? I had been working as a paralegal in family l...