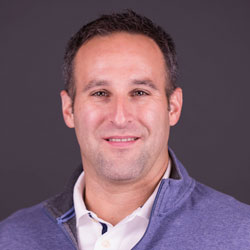 What led you to a job at Cerium Networks?
The job was advertised through Tech Qualled Launchpad Academy for Veterans. I had great feeling from everyone I spoke with and got the impression that this would be a place where people want to do great things.

While in the Air Force Dave, traveled the world and has been re-located many times. Before moving to Billings with Cerium, Dave was most recently stationed in Oklahoma. Cerium is his first job placement post service.

What is your favorite part of working in Technology?
IT changes all the time and it touches everything.

Outside of technology, what is your dream job?
I would be a professional adventurer; hiking, remote stream fishing, motoring across the nation!

What is your favorite thing about working at Cerium?
How much I am supported by everyone I work with. People offer to help on a daily basis, and I trust everyone at Cerium to guide me in the right direction.

What do you do when you’re not at work?
Kids, honey-do’s, and sometimes I get to go fishing. I can fish anywhere, anytime—from ponds to lakes, to rivers. I am looking forward to becoming a trout fisherman in Montana.

What is the craziest thing you’ve ever done?
I’ve done some crazy things but driving traffic circles in Amman, Jordan takes the cake. Here’s what he means >>>

What is something most people don’t know about you?
I used to be a high school band director! I first started playing the trombone in the 5th grade and played thru college. In fact my college degree in Music and Education from Wichita State. After graduating I taught music for grades 5–12 for a school district in Wichita and later moved to Kansas City where I subbed until I went into active duty in the Air Force.

My role in the Air Force was as a system operator. My focus was on radar operations, tracking control and surveillance. I also served as a liaison to the Army, where my role was plan joint efforts with the Army.

What is your favorite TV show or movie?
The Office—A hilarious show.

Who is your idol?
Chuck Norris. Nothing more needed!!

About Kate What led you to a job at Cerium Networks? I worked with Cerium as a customer for ab...

END_OF_DOCUMENT_TOKEN_TO_BE_REPLACED

About Ryan What led you to a job at Cerium Networks? I worked in one of the most challenging jobs ...

END_OF_DOCUMENT_TOKEN_TO_BE_REPLACED

About Lisa What led you to a job at Cerium Networks? I had been working as a paralegal in family l...